Because I read Kindle books I can’t read the jacket copy, and because I don’t usually read reviews I don’t spoil a book. I guess I was the only one who read this cold and was completely at sea. I read it because I love Lionel Shriver’s writing, and I kept reading even through I was thoroughly confused. One minute she would be married to Ramsey and the next chapter she was cosily sitting on the couch eating popcorn with Lawrence watching Ramsey play snooker. One chapter she won a prestigious prize for children’s literature, then in another chapter she lost to her rival. I finished the book because it was written by Lionel Shriver, but I never understood it.

Then I went to Goodreads to read the other reviews posted and found out that seemingly everyone but me had advance notice that the book was an alternative universe with Irina kissing/not kissing Ramsey on his birthday the pivotal event in her life.

I feel a book should stand on its own, and there is an indication of what it is contained in the book that Irina writes that wins/doesn’t win the children’s prize. Unfortunately it came too late to rescue the book for me.

I liked this book even more the second time around. Being able to take thing slow because I know what is going to happen makes it possible to catch the nuance that I missed the first time around. I loved the witches and wished there were more about them.

Pullman seems to love his characters and lovingly describes them and what happens to them. That is why I find it puzzling to read of the actions of Lord Azriel and Mrs Coulter. No explanation is given for their differing names and objectives. Perhaps it is explained in later books.

Lyra moves from her artless naivete of an child running around the campus of an alternative Oxford University to bearing the burdens of an adult. Each episode causes her to grow and expand while maintaining her childlike innocence. At time the knowledge is almost too much for her to bear. She is helped by her demon Pantalaimon, whose courage makes it possible for Lyra to do what is necessary.

There is more to be found than can be done in two readings. Like other great stories this one requires many readings to uncover its true meaning. 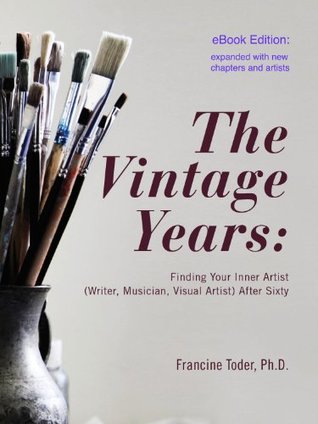 A fine young cello teacher in 2004 decided to test her curiosity about the ability of older people to learn music. After a year’s search the teacher finds her subject. In a documentary filmed to record the result of her experiment, Matty’s hands betrayed the evidence of her age. However, the rest of her body relaxed and swayed to the timeless and endless place that is music. The teacher and student both learned that old brains can do some things as well as twenty-year-old brains.

The book continues with example after example of people who took up music, or painting, or sculpture or writing, all in their 60s or older. Instead of the stagnation we expect in later years, many exhibit an ability to learn and grow, especially in the arts.

Whether you have always wanted to paint or make music, sculpt or write, this book encourages you to take it up.

I bought this book to assist me in creating my character when I was playing in the Society for Creative Anachronism. I wanted the freedom to be a single woman, wealthy enough to live on my own without the responsibilities that great status would bring. Rich enough to be comfortable, but not so rich as to be a target for marriage to a man looking for a rich marriage portion, and well connected to men who would protect me without interfering with my life.

Alice de Brynne fit the bill nicely. As a householder and landowner of several large estates, she had more freedom than most women of her time, and she spent it in tending to her estates. Her day-to-day life was closely attuned to her tenants and their needs. According to her account books, her daily meals with her tenants were simple, with occasional meals more lavish than usual when entertaining visiting prelates or aristocracy. She knew the names and families of her workers. Hers was a familiar face in the fields and workhouses on the main estate of Acton.

In addition to being full of the detail of daily life, this book is beautifully produced, with many black-and-white pictures as well as color pictures. It is a detailed portrait of an ordinary medieval gentlewoman. 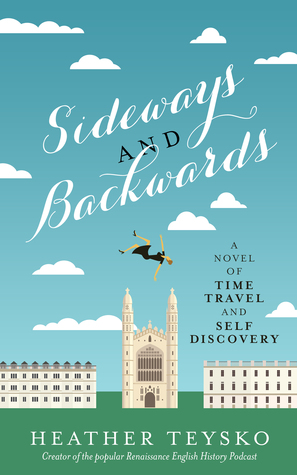 This entertaining time travel story follows the adventures of a young woman in England named Tasha Delancourt. At 35 she has reached the summit of a solid job as editor in chief at Court Magician. Waking up the morning after the night before with her phone ringing, 187 messages, and those photos . . .

Her publicist advises her to lie low for a while and let her do some damage control. She might be able to salvage her position, but it’s going to be a major job. Deciding to take her advice, she heads out for a quiet weekend in Cambridge. Sitting in a pew at evensong at Kings, she enters into the spirit of the music and begins to meditate on the direction her life has taken lately. When the room begins to spin, she attributes it at first to the hangover she still feels. Then she passes out.

When she wakes up it is 1539, and her adventures begin. She is befriended by a scholar named Matthew and a midwife named Alice, who try to help her return to her own time while avoiding being burned as a witch in 1539.

This book a lively account of the daily routine in 1539 and brings to life the challenges facing women without a man to protect them. It also stresses the dangers facing a woman who is not properly submissive to man’s authority.

Teysko deftly handles the challenges of life in 16th century England as well as the challenge her heroine faces in trying to read her own time.

I expected nothing less from the host of the podcast Renaissance English History.

I love Thai food. I eat it at least once a week. I am blessed that there are three good Thai restaurants nearly in walking distance of my apartment. I have a rich fantasy life. Because I enjoy eating Thai cooking, I can actually persuade myself that I will buy a cookbook and learn to cook it. If that were going to work, This book could be the one. The recipes are clear and doable. The problem is with me. I barely spend enough time in the kitchen to organize a peanut butter sandwich, much less a bowl of curry.

My grandmother left a handwritten document recording everything she knew about the family. When my father had it typed, it ran to 12 pages, single-spaced. She had a remarkable memory for family history. There was one huge gap: aside from the date and place of his birth, there was nothing about her husband, my grandfather Monet Gould Metcalf. Many years later, my mother told me the reason. My grandfather was a half-breed, and she was ashamed that she married him because she was pregnant. Not only was he a half-breed, but he was a bastard. His parents weren’t married. They couldn’t get married because the anti-miscegenation laws prohibited marriage between a white person and an Indian (as they called Native Americans then.)

As he worked and traveled around Northern Arizona, my father collected history and stories about the places from the people he encountered. He would share these stories with my brother and me to keep up interested as we drove through the places he told us about. One of the stories was about the famous Pleasant Valley War between the sheepmen and cattlemen who ranched the Tonto Basin and Mogollon Rim region. He told us about Zane Grey’s love for this country and the location of his cabin where he lived and wrote many of his books.

While a work of fiction, To the Last Man is based on fact and has captured the imagination of generations of readers who love the Old West. Arizona was populated by proud, independent men who didn’t look to the law to right wrongs, but took matters into their own hands. Lawmen were few and far between and much could happen while a person waited for the law the step in.

In Grey’s version, the feud is a result of a stolen love. While Gaston Isbel is honorably fighting for the North in the Civil War, the dastardly Lee Jorth marries his girl. The woman dies after giving birth to his daughter, Ellen Jorth. Both families end up in Arizona. Isbel sends to Oregon for his half-breed son Jean Isbel to come to him in Arizona, bringing his woodcraft skills and a load of weapons and ammunition. Stopping to get directions, Isbel meets and falls in love with Ellen Jorth. Neither knows who the other is or the family history that lies between them.

Separated by their fathers’ hatred and the bloody war that rages around them, Isbel and Jorth have to fight their way to their own happiness.

Published in 1921, the book has accurate descriptions of the country and the men involved in the feud that counted nearly 50 men as its victims. The inspiration for Jean Isbel, Edwin Tewksbury, died in 1904 and is buried in Globe, Arizona. He was as handsome as Grey describes him: 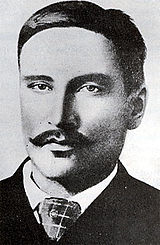 Last summer one of the academic members of Temple Emanu-El in Tucson, Wendy Weise PhD, offered a class on the topics of the Garden of Eden, sex, and lost innocence. Her material included several excerpts from Milton’s Paradise Lost. I was intrigued and decided to use Milton’s poetry to fill one of the squares in the Books on the Nightstand summer Bingo card, the square set aside for a selection from the Harvard Classics Five Foot Shelf of Books. I had never read Milton’s poetry, although I was familiar with the names of his major works. It was a revelation to read Paradise Lost with its vivid imagery. Why no one has made a graphic novel out of this work is beyond me.

One surprising element Milton added to the familiar story was the effect that the beauty and innocence of  Eve had on the Serpent:

Such pleasure took the Serpent to behold

This flowery plat, the sweet recess of Eve

Angelic, but more soft and feminine,

Her graceful innocence, her every air

Of gesture or least action, overawed

His malice and with rapine sweet bereaved

His fierceness of the fierce intent it brought.

That space the Evil One abstracted stood

From his own evil, and for the time remained

Of guile, of hate, of envy, of revenge.

But the hot hell that always in him burns,

Though in mid Heaven, soon ended his delight,

And tortures him now more, the more he sees

Of pleasure not for him ordained. Then soon

Fierce hate he recollects, and all his thoughts

Although I think of Milton in terms of the majesty of his major works, he could be playful and humorous in his early, small works, especially those written for joyful occasions. His was a turbulent age, torn by civil war, broken friendships, and personal tragedy. His work soon took on the profundity and gravitas I associate with it. From Sonnet to the Nightingale to Samson Agoniste is an extreme trajectory.

It is a joy to have all the poems collected in one place and to his life from youth to old age reflected in his work.